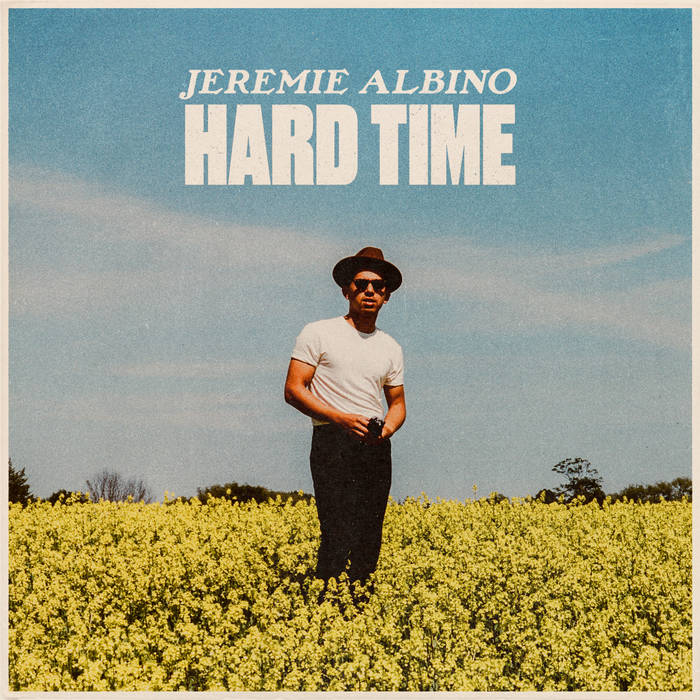 There’s no counting the worlds Jeremie Albino has travelled to get to where he is today, and no telling which ones he might head to next.

Born and raised in the bright and booming metropolis of Toronto, his heart led him out of the city and into Prince Edward County, where country living and a decade of working on farms gave him the time and space to hone his songwriting skills. His music nods to all manner of troubadours who rambled down similar paths throughout history—he nods slyly to the legendary blues singers who inspired him, offers a soft and insightful touch with his folk songs, and stomps and swaggers through soulful rock ‘n’ roll. But Jeremie Albino is a natural and an original, created by an alchemy that favours, above all else, that most mysterious and coveted of qualities: heart. And his wildly impressive debut, Hard Time, overflows with it.

Albino grew up immersing himself in early field recordings and the music of legends like Lightning Hopkins and Skip James, first learning to play the harmonica and then moving on to guitar. On Hard Time, he pulls just as much as he needs from his influences, reverent to the musical forms that made him but actively sculpting his own voice. The easy groove of “Amelia” sets toes tapping to its fantastical love story as Albino tries to bridge time and space to connect with the ill-fated aviation pioneer Amelia Earhart over warm organ swells. “Lilac Way”—inspired by his mother’s love for the pale violet flower—envisions breezy country roads with blooming strings and nods to Jeff Buckley’s sparse, early New York café recordings. With “Hard Time,” he shifts gears into bristling dive bar rock ‘n’ roll, as a narrator behind bars wonders whether his partner-in-crime will be there smiling, leaning on the hood of a car, to pick him up at the end of his sentence. The dusty, understated “Shipwreck,” complete with the sound of creaking wooden floorboards, takes listeners a thousand leagues under the sea and back to 1883, witnesses to a lonesome grave. His storytelling reaches its peak on the doomy “Wildfire,” offering up a tale where Mad Tom and his old hound dog stand defiant in the face of flames creeping up the hill, determined to stop the destruction with his sheer force of will.

The sagas of these out-sized characters and the vivid imagery they pass through are given proper treatment by the peaks and valleys of Albino’s music, dynamic enough to conjure something light as the sway of flowers in the wind, or the grandeur of an apocalyptic storm. “They’re stories I wrote that came from daydreams,” Jeremie explains, “about life, love, people, and another time.”

Not only is Hard Time Jeremie’s debut album, but it also represents a slew of firsts for the young songwriter. Before embarking on the recording, he’d never been in a studio, played with a band, or worked with a producer. Jeremie’s earthy Americana has never been laid to tape until now. And Hard Time sounds just as untouched by pretension as you’d expect from a musician who got to this point simply by letting his heart lead the way. The first recordings were laid down at the Bombshelter in Nashville with producer Andrija Tokic (Alabama Shakes, Hurray For The Riff Raff, Langhorne Slim), and the rest was finished off at Union Sound in Toronto with the guidance of Albino’s manager and producer Crispin Day.

There’s no counting the worlds Jeremie Albino has travelled to get to where he is today, and no telling which ones he might head to next. Born and raised in the bright and booming metropolis of Toronto, his heart led him out of the city and into Prince Edward County, where country living and a decade of working on farms gave him the time and space to hone his songwriting skills. ... more

Track Name: Last Night
Last night, you walked through the door
Like a dream I never seen before
And the way you light up the room
I just want to be right next to you
And when I saw that sweet look on your face
You said are you, gonna be my man?

You had me dreaming like a fool
Darlin I'ma spend my life with you
The way you're movin, on the floor
Don't you know you got me wanting more
Then I said with a scared look on my face
Now, are you gonna be my girl?

Always thought i'd be runnin' scared
No one there besides me
Always thought I'd be a lonely man
Till ya said you'd have a dance with me
Track Name: Amelia
I was meant to walk this earth
You were meant to fly
I could tell by the way you look up there
(I can) See it in your eyes

Oh amelia
You flew too close to the sun
Oh, if I knew you
Would of told you to run

For a girl whos long been dead and gone
I sure have got it bad
Still, i am weak man for your love
For love I'll never have

When the lilacs bloom x2
Don't you know that's when they sing their little tune.
That lilac tune underneath the moon

So you want to take a stroll, down lilac way.
Won't you come and hold my hand, we gonna take the whole damn day
Down the lilac way, lilac way

Well wouldn't it be nice
To stay here all our lives
It would be so good
How I wish we could
Track Name: Hard Time
Would you pick me up?
If I ever make it out of here
Or would you break me out
If they never let me go my dear

But I ain't got nothin but time
Time, time, hard time
Now that I crossed that line
Line, line, hard line
With you

When I make it out?
Would I find you grinnin' ear to ear
Leaning on your car
Like you've been waiting there for years?
Or would you cut me down? ​
Like the years i've spent locked up in here

Would you cut me down? ​
The only thing that I could fear

Well it doesn't matter where we go,
We'll always find a way
On a city street or a country road
Anywhere with you i'll go X2

I rode down, down to your house
Threw a rock up hit your window and I wait till you come out
Sneaking out
Like we done before
But this time, It meant so much more

Then once night fell
And the whole town was sleeping
We ran up, up to chapel hill
Picked that locked door
With your hair pin
And darling, we just walked right in

Bandcamp Daily  your guide to the world of Bandcamp

Guests include Kassa Overall and Muriel Grossman, plus an LP of the week by Van Hunt.